Failed to activate new LV. Limit for the maximum number of semaphores reached.

Came across this error when attempting to create a logical volume for a VM; 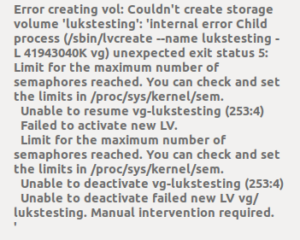 I’ve run into this before, when a VM failed to start on Xen. You can try to increase the number of semaphores by adding something like the following to /etc/sysctl.conf

and then running sysctl to import, and ipcs to check

Though I found this didn’t actually help with my issue. So what I did was to free up semaphores for pids that don’t exist anymore using a script.

Once that had finished running, I had to manually remove the logical volume I had tried to create, as the namespace of it still existed even though it failed to create.

Then I could recreate the LV and finish provisioning the VM I was setting up to test NDBE!